By Highchairs and Headaches

Despite the title of this website, my kids haven’t seen a highchair in years. They do, however, still give me headaches. Migraines, in fact.

Sometimes we lie to the newborn or toddler parents still stuck in the dirty diaper trenches, telling them it’ll get easier. It doesn’t.

Physically, yes, it does get less demanding. I don’t envy parents who can’t shower or shit without a tiny person watching their every move. I don’t miss midnight feedings or sleep deprivation so bad you start absentmindedly putting bottles in the garbage and used diapers in the sink.

When your kids get older, there’s arguably more free time, more sleep and more personal space. It sounds like a dream, right? Don’t get too excited. The next phase is a total mindfuck and you will have no idea whether you are doing anything right at all. None whatsoever.

My son once told me a fellow fifth grader showed him a bag of weed he’d brought to school. Drugs in elementary school?! I had to narc on a 10-year-old!

Or plan it for the day I catch him sexting some seriously graphic stuff with a girlfriend on his phone, like a friend caught her 14-year-old son doing recently.

Or for the day I find a dick pic on my daughter’s phone, like another friend did when checking her 12-year-old daughter’s phone one day. 12!!!! How do you even UNSEE some little boy’s…thing…. ugh.

Its enough to make you want to deadbolt the doors to their bedrooms forever.

My son has recently started asking for more freedom than I can comfortably handle. He asks to go to the park with his friends—their parents let them, he begs. And I’m wracked with guilt no matter what I do. I feel guilty if I say no because I’m not ready for all this independence and I’m not sure he is either, and he’s gonna hate me for making that call. And I feel guilty if say yes because I’ll feel like a terrible mother letting my baby go out into the world unsupervised.

Observe below how I slowly lose my shit, and he is not concerned in the least: 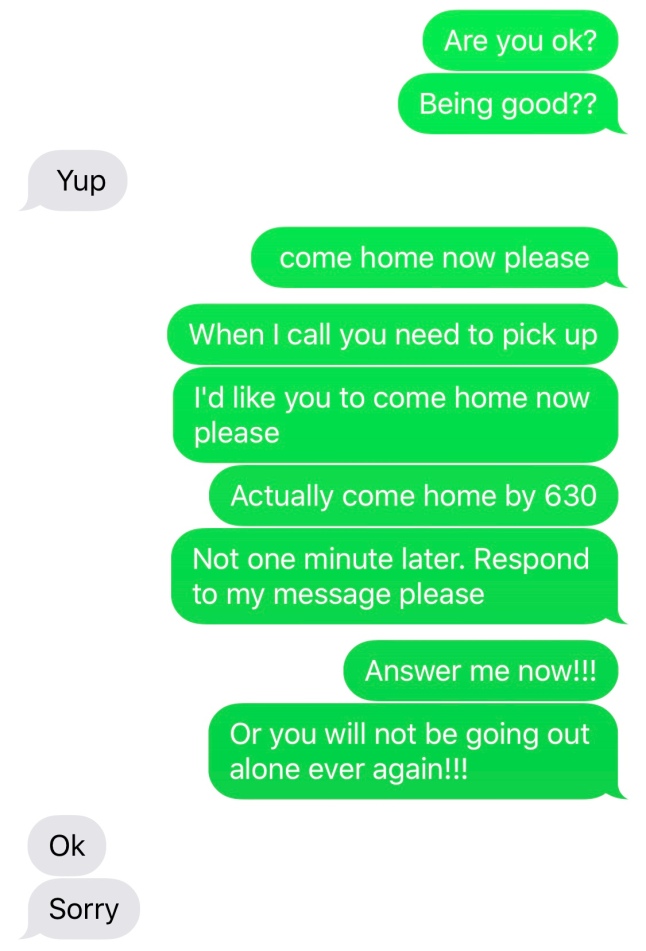 And my daughter? She’s 7 going on 17. She steals my son’s phone and holes up in her room for hours listening to loud music and doing God knows what else. You might think I sound like a bad mother but can you honestly say you are looking over your kid’s shoulder every second? If you say yes, go check their YouTube history and let me know if you’re still so confident.

Most days everything is sparkly and sunshine and rainbows and butterflies, but once in a while she purposely dresses like she’s attending a funeral and I wonder what kinda goth shit is waiting on the horizon.

She has classmates that are incredibly mean to her sometimes, and I have to explain to her that in life people will often be cruel to her because they are jealous and threatened by her, that she should ignore them and as long as she is always nice to everyone she doesn’t need to worry. Then a week later she’s claiming the bullies are her friends now, and I just know the cycle is on repeat and she will be hurt again.

You aren’t a parent if you haven’t visualized kicking the crap outta some asshole kid for mistreating your child at least once or twice.

The thing is, kids are testing the looming adolescent waters as they grow older and leaning on you to save them from drowning. They think they can swim perfectly, but you know they can hardly hold their head above the water yet. It’s absolutely terrifying.

They ask difficult questions. They test your boundaries. They don’t listen, don’t care, don’t understand there is a big scary world out there that’s going to swallow them up if they aren’t careful. They just want more freedom to do as they please and it’s your job—in between the cooking and cleaning and working and hectic schedule— to keep them safe and sane while you loosen your grip on them a little more each day. It’s an impossible feat, and you WILL fuck up. Over and over. And it does not get easier. Not now, not ever.

So hang in there. Or don’t. What the hell do I know? My 7-year-old is upstairs listening to a song with the word “fuck” in the chorus, on repeat. Gotta go.

One thought on “It Doesn’t Get Easier”

Check me out on: