By Highchairs and Headaches 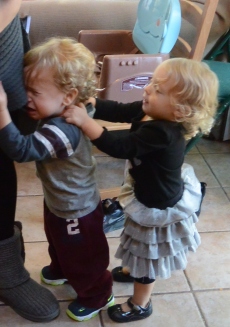 I am willing to pay someone to get my kids to stop fighting. Cash, outright. I’ll even throw in some old jewelry and a special shout-out on my blog. Please someone, anyone, just hypnotize these little monsters into thinking they actually like each other. Any takers?

Sometimes they get along. Sometimes they laugh and giggle together and chase each other happily outside, and it’s music to my ears. Like the sound of actual angels singing into a set of Bose speakers on full volume in my living room. There’s never a happier moment than when the monsters are frolicking together through the house like little bundles of smiles and joy and awesomeness and wonder.

But that’s so rare I could cry.

Most of the time they are at each other’s throats, one crying, the other screaming, some piece-of-shit toy at the forefront of the madness, ready to be forgotten five seconds after finding its way into the victor’s grasp. Because they don’t sincerely give a crap about the toy they are fighting over. Or the TV show. Or the bag of chips. Or who got to go in the car first. Or whatever is causing all hell to break loose. It’s all just a battle of wills, a reason to claim the victory over a sibling. Or maybe it’s all just a ploy to entirely strip mommy of her sanity and thus gain unlimited access to the snack cabinet.

I can’t deal with it anymore. I can’t even take a five-minute shower anymore without the shrieking sounds of “GET OFF OF IT!” and “NO I HAD IT FIRST!” piercing the bathroom door. My showers, my five minutes of peace and quiet, are no longer the sanctuary they once were.

Mealtime is a nightmare too. Why doesn’t she have to finish her broccoli? Why can’t I have the blue cup? She’s sitting to too close to me. He keeps kicking my chair…AHHHHH!!!! Mommy’s about to go eat dinner on the bathroom floor with the door locked.

Sometimes I pretend I don’t hear it. I simply say to myself “it’ll stop eventually” or “they’ll work it out themselves.” But who am I kidding? What I’m really thinking is “let those little assholes kill each other.” I then attempt to appear oblivious to the increasingly loud screaming and potential violence erupting in the next room. I quietly pray they will just leave me out of it, begging some nonexistent peacemaker to sprinkle some happy dust over the entire house. But any fool can tell I’m only delaying the inevitable. It’s usually mere seconds before I find myself tangled up in their angry clash, screaming loudest of all, tossing kids in timeout chairs and taking away tablets and TV privileges.

Maybe I deserve this. My brother and I did some pretty intense fighting when we were kids. One time I turned on the blow dryer and put it down his shirt and held it there until he was screaming in pain. I know, I know, that’s bad. But he knocked out my front tooth with an actual hockey puck once. So I’d say our psychotic sibling rivalry was warranted on both ends. (Side note: Mom, Dad, sorry…?)

And now the powers that be have decided I should have a little taste of my own medicine, I suppose. They’re shoving a metaphorical blow dryer down my shirt, turning it on the highest setting, and burning away my sanity. One petty little argument at a time.

Check me out on: